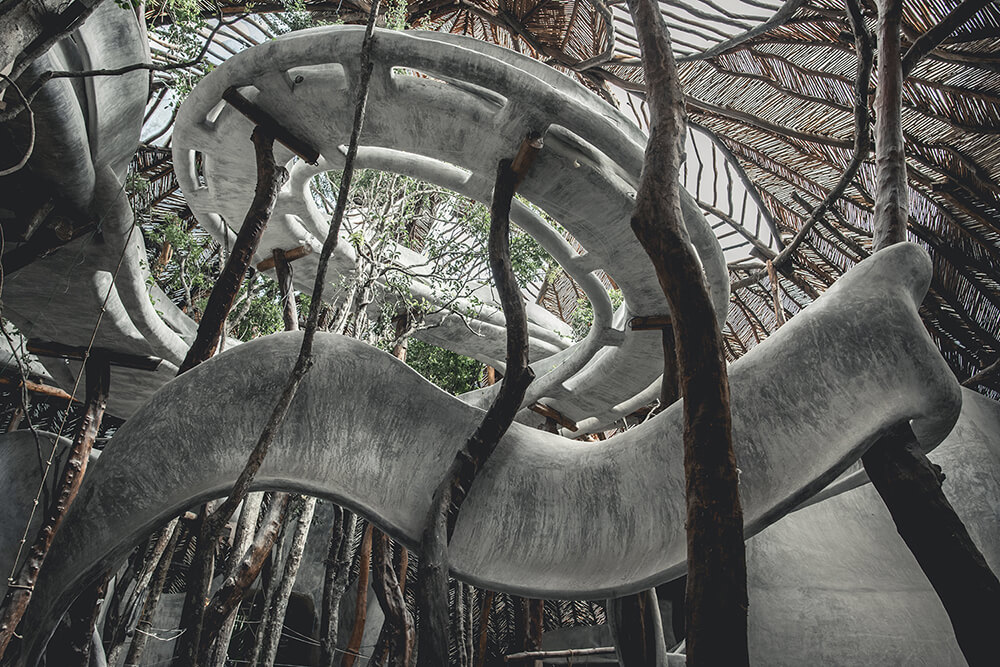 The story behind SFER IK Uh May

SFER IK was conceived as a multidisciplinary space that proposes artistic exploration and seeks to inspire creators. It is a place that generates dialogue between artisans, local communities, and world-class artists, while adding nature and jungle inhabitants into those conversations.

SFER IK Uh May was finished in November 2018. The whole process took only 9 months, with 480 people working double shifts to build all 1.100 round meters. The development of this project was organic. No architectural plans were followed, as it wouldn’t have allowed creativity to flourish.

Four main materials were used for building SFER IK. The structure was made with zapote wood. A tree found in the Yucatan Peninsula, which is also known as the gum tree, because the resin extracted from its bark is the main component for chewing gum. The second material is fiberglass, this one covers the entire structure acting as insulation. Finally, bejuco and cement, which are the predominant materials in the space. The bejuco is a vine that, like the zapote, is native to the jungle in the area. This material was treated manually by local people, the bejuqueros, who play with the vine's flexibility to achieve the organic shapes that the space requires. The cement was applied with a manual technique called ferrocement. It is a process like the one used in sculptures, where a base is assembled with wire mesh and filled with a mixture of cement, sand, and water. Throughout the process, Mayan workers contributed their ancestral knowledge about materials and types of construction. Thanks to that, it was possible to avoid the use of heavy machinery thus reducing the environmental impact.

The dome, the main structure, was the first part to be completed. It was a 2-month process where the zapote wood pillars were placed, reaching a height of 15 meters and a diameter of 25 meters. Tied together, these giant posts offered a glimpse of what the project was going to become. Inside, the jungle was kept intact, every tree remained in its place and the topography was maintained in its original state. The construction integrated nature into the museion, coexisting without destroying anything.

Once the limits of the dome were defined, the interior design began. PVC pipes were laid down to materialize what was once imagined, into the physical world. The entire team worked with flexibility and willing to change course. SFER IK was built following the same direction, avoiding joints and creating the illusion that it is all one single piece.

This space with biomorphic architecture and unique in its kind is proof that everything we imagine can be possible if we think differently, with creativity and flexibility. We must be willing to change on the fly and allow ourselves to be surprised by imagination.